new book reveals the 22-year effort by FBI director J Edgar Hoover to get Albert Einstein arrested as a political subversive or even a Soviet spy.

Uncovered FBI files are revealed in a book by Fred Jerome who says it was a clash of cultures – Einstein’s challenge and change with Hoover’s order and obedience. 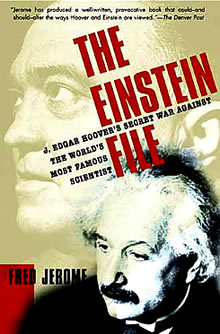 From the time Einstein arrived in the US in 1933 to the time of his death, in 1955, the FBI files reveal that his phone was tapped, his mail was opened and even his trash searched.

Einstein became world famous in 1906 for his Special Theory of Relativity that deals with light.

His General Theory of Relativity, published in 1919, deals with gravity and has been called mankind’s greatest intellectual accomplishment.

The Einstein File begins with a request by J Edgar Hoover in 1950: “Please furnish a report as to the nature of any derogatory information contained in any file your bureau may have on the following person.”

That person was Albert Einstein, and the request intensified a secret campaign to discredit him.

Hoover was worried about Einstein’s liberal 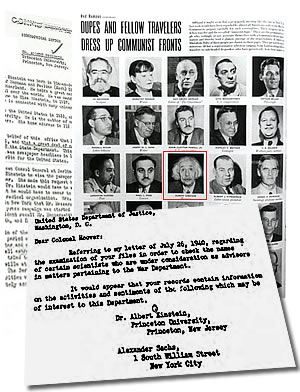 intellectualism and his dabbling in politics, something that has been forgotten today. It has been overtaken by Einstein’s absent-minded professor image.

But Einstein was outspoken against social injustice and violations of civil rights.

The fledgling state of Israel once offered Einstein its presidency. Einstein declined.

The broad outline of this story has been known since 1983, when Richard Alan Schwartz, a professor of English at Florida International University in Miami, obtained a censored version of Einstein’s 1,427-page FBI file.

He sued the US Government with the help of the Public Citizen Litigation Group to obtain all the documents in the Einstein file.

The new material shows how the bureau spied on Einstein.

“It is like the agents got up in the morning, brushed their teeth, opened other people’s mail and tapped some phones,” he told the BBC.

After he left Germany, appalled by the barbarism of the Nazis, Einstein lent his name to a variety of organisations dedicated to peace and disarmament. 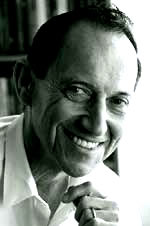 Because of this, the Woman Patriot Corp wrote a 16-page letter to the State Department, the first item in Einstein’s file, in 1932, arguing that Einstein should not be allowed into the United States.

“Not even Stalin himself” was affiliated with so many anarchic-communist groups, the letter said.

Fred Jerome reveals that the 1,800-page document prepared about Einstein by the FBI shows that the agency even bugged his secretary’s nephew’s house.

The files reveal that for five years J Edgar Hoover tried, and failed, to link Einstein to a Soviet espionage ring.