Saku Koivu is a Winner – Guy Bertrand is a Loser!

The media horde at the Bell Centre was larger than usual yesterday and that was to be expected the day after Quebec City lawyer Guy Bertrand branded Saku Koivu as a criminal for failing “to respect the right of Quebecers to be served in French.”

In addition to the usual sports media, the gathering attracted the yahoos who couldn’t tell the difference between a hockey puck and a pétanque ball, but are ready to attack a man who should be regarded as a national treasure.

I’m on record as saying the Canadiens’ management failed Koivu when it didn’t encourage him to say a few words in French, but Bertrand’s grandstanding trivializes the serious nature of the debate over reasonable accommodation.

Before you give any credence to Bertrand’s ranting, I suggest you look at the record of the two men involved in some critical areas and ask which brings more credit to Quebec, which one would you rather have as a neighbour. 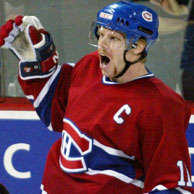 In an era in which athletes yearn for free agency and the riches that accompany it, Koivu has stuck with the Habs for 12 seasons, despite the fact he has been criticized for not being French.

Bertrand has been a hardline separatist, a passionate federalist and is again a separatist.

Tomorrow, who knows? After all, this is a man who once stood before the Empire Club in Toronto and said: “God bless Canada.” 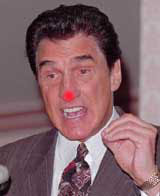 Koivu has battled through a life-threatening cancer and a career-threatening eye injury and remains one of the best players in the game.

Bertrand’s greatest risk might be spending too much time in the sun perfecting his tan.

Koivu helps promote peace and understanding as a member of the International Olympic Committee’s athletes commission. 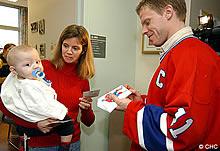 Koivu has raised millions of dollars for medical diagnostic equipment and cancer research through his foundation and regularly visits hospitals and offers support to cancer patients.

There’s no record of a Foundation Guy Bertrand.

Koivu has won a gold medal at the world championships; three Olympic medals; two silver medals at the World Cup and has been the highly respected captain of the Canadiens and the Finnish national team.

Bertrand helped found the Parti Québécois, but was defeated when he ran for the party leadership.

There might be those who feel I don’t have a right to comment on this matter because, while I’ve never lived on the West Island, I’m sure Pierre Curzi feels that I’m not un vrai Québécois.

I’d have to disagree. I’ve spent most of my adult life in Quebec and, unlike those who are vrai Québécois by accident of birth.

I chose to live here.

I wish I spoke better French, but I manage to make myself understood when I shop. I’m proud of the fact my children are fluently bilingual.

I hope that my son won’t follow his sisters to Toronto, but I’m aware he occasionally feels the sting of being the English kid in his French high school and that there are those who will never accept him as un vrai Québécois. I know if he does leave, he has the tools to survive elsewhere and I find it sad not every vrai Québécois is as fortunate.