Newly declassified documents obtained on Tuesday by the Montreal Gazette under the Access to Information Act show the RCMP kept close tabs on former Parti Québécois premier René Lévesque as early as the 1940s and as recently as the 1980s.

The file, heavily censored and containing more than 2,500 pages, was allowed to become public on the 20th anniversary of Mr. Lévesque’s death, on Nov. 1. The file was delivered late Tuesday. 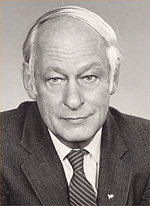 Though large sections are blacked out or removed entirely, the report shows the police force was interested in Mr. Lévesque, first as a possible communist in the 1950s, while he worked as a radio and television reporter at Radio-Canada and Radio-Canada International abroad and in Montreal.

They then paid even closer attention as Mr. Lévesque grew to be a leading figure of Quebec nationalism, even while he was still a cabinet minister in the federalist Liberal government of Jean Lesage. Mr. Lévesque split with the Liberals in 1966 and went on to found the forerunner of the PQ, which took on the name Parti Québécois in 1968.

The RCMP Security Service later became the Canadian Security Intelligence Service after the former was discredited largely because of its overzealous attempts to get information on Quebec separatists, particularly the ultra-radical FLQ, responsible for the murder of Pierre Laporte and the kidnapping of British diplomat James Cross in October 1970.

It took the Mounties until 1972, four years before he led the PQ to a stunning victory in a provincial election, to conclude that Mr. Lévesque, who never advocated violence in the achievement of Quebec nationhood, was not someone the government should consider truly subversive or revolutionary.

But the surveillance continued nonetheless. And it was during this period the RCMP enlisted PQ cabinet minister Claude Morin as an informer on the sovereignty movement, Mr. Morin has admitted.

The Mounties’ interest in Mr. Lévesque lasted into the twilight of the embattled former premier’s political career and past the 1980 referendum, which the sovereigntist forces lost. He was propelled from the party’s leadership in 1985, a year after CSIS had taken over the nation’s security operations.