MONTREAL, ROME — One of Canada’s wealthiest businessmen, Montreal cheese magnate Lino Saputo, is denying that his company has ties to a Mafia money-laundering scheme. 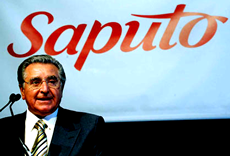 Mr. Turrisi heads two companies that promote Italian goods, Made in Italy SpA and Made in Italy Inc. He and his wife, Brenda, are also officers of a company registered in West Palm Beach, Fla., Saputo Enterprise Corp.

Italian police allege that Mr. Turrisi was selling the Made in Italy group at an inflated price, with Mr. Saputo eventually taking possession through the Florida-based Saputo Enterprise Corp.

“This makes no sense. Even if it only involved one buck, it would make no sense,” said the founder of Saputo Inc., Canada’s largest dairy-processing company.

“I’m a victim. Someone is using my name.”

The allegations were first reported last month by the Milan weekly l’Espresso.

In a written statement e-mailed from the Milan office of the Nucleo Polizia Tributaria, the Italian fiscal police reiterated the allegations.

“The investigation has shown that the necessary sum to finance such a company purchase on the part of Saputo is completely disproportionate when compared with the assets of the two ‘Made in Italy’ companies,” the e-mail said.

It added that the Italian police have wiretaps of Mr. Turrisi and another arrested suspect, Rodolfo Fedi, talking about the involvement of “the cheese king” in the transaction, which the police interpreted as a reference to Mr. Saputo.

“I’m a victim of my reputation. Saputo is a successful company, so anybody could use my name without my knowledge.”

The e-mail from Italian police said the Polizia Tributaria have been working with Canadian officials since 2004 and have sent to Canada two separate requests for assistance.

The first request brought “important information” about Mr. Turrisi and Mr. Rizzuto, the Polizia Tributaria said in another e-mail.

The e-mail said Canada has not responded to the second request.

A draft copy of that request shows it is addressed to UMECO, the French acronym for a Canadian law-enforcement unit fighting organized crime.

“The Financial Police has intercepted conversations from which we understand that there is a current operation to sell the companies Made in Italy SpA and Made in Italy Inc. to the Canadian entrepreneur Lino Saputo for the sum of $600-million, of which 300 would go directly to the family headed by Vito Rizzuto,” the document says.

The request concludes: “As such, it would be extremely useful to obtain from UMECO information that proves the link between Saputo and Rizzuto.”

The affidavit says that Mr. Turrisi was wiretapped speaking to Mr. Rizzuto in respectful tone, saying for example, “I kiss your hand” after greeting him on the phone.

“Vito Rizzuto is the real and hidden dominus of the operation dealing with the sale of Made in Italy to the Saputo group,” the affidavit said.

Identified in court documents as Canada’s most powerful Mafia boss, Mr. Rizzuto is serving a 10-year sentence in the United States after pleading guilty to his role in a triple murder.

Italian authorities allege that Mr. Rizzuto kept control of the money-laundering operation even from behind bars.

Mr. Saputo said he doesn’t know Mr. Rizzuto. He did say in the interview that he had attended the 1992 funeral of a man identified in court documents as a mobster, Giuseppe (Joe) LoPresti.

“Listen, we can’t be accused by association,” he said.

Born in Sicily, Mr. Saputo came to Canada in 1952. His company is publicly traded on the Toronto Stock Exchange, and while he has ceded daily operations to his son, Lino Jr., he remains the company’s chairman.

He is on the Forbes list of billionaires, as Canada’s 14th wealthiest man, with assets of $1.4-billion.