his may sound like an odd title for an article, but it follows up on something that was proposed to me and that I found to be totally unnecessary until I considered the ramifications and applications it had in other areas.

GPS systems are now considered standard equipment on many new cars, but where was their genesis? Like many other technological systems today, GPS was born of a military idea to be able to track movement of not only troops, but goods (read weapons, ammunition, fill in the blank as you wish..) for good or for bad.

On a first visit to the veterinarian with my new cat, I was like a proud new parent. I have this little life that is linked to me, and I wanted to do the best I could for him. 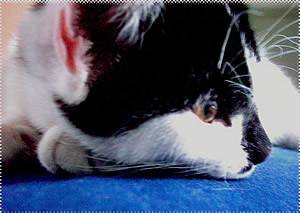 So, he got his shots, a check-up, was declared sound, healthy and to come back in a year for follow-up. Then, I was taken aside to be told that “if I really loved my pet”, I would consider having him “Implanted” with a type of GPS chip (in the event that he would get lost or stolen), and that I would have a 1-800 number, available to me 24 hours a day in order to track him. First of all, it seemed too much like Big Brother to me, and think of it.. your cat gets out and you have to talk with the 1-800 operator to have them tell you that the cat is now up a tree, has changed positions to run across to the neighbors. The whole idea seemed ludicrous. Until I heard that it was being applied to people, then I was outraged.

Shortly afterward, I read an article where people were talking about how this would be such a wonderful idea, in the case that their Children become lost, got kidnapped and how this would help identify where they could be. Largely, the implantation program would serve the wealthy people who have thoroughbred pets who have cost a lot of money and time. It would only follow that these same people, would of course be concerned about child kidnapping. I was told that this implant is “smaller than a grain of rice” and would be injected under the skin.

I realize that tracking certain people and their whereabouts (for the purpose of crime prevention, etc.) is a good idea and a deterrent to further crime. I realized that this little “grain of rice” could be also used for purposes that ethicists continue to debate. 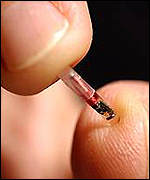 A question that was brought up recently was this: If you were to have an elderly family member who was suffering from Alzheimer’s disease and was subject to wandering off, would you feel it was your right as a care-giver to implant such a chip in them in order to keep better track of them. Who is the best served here, the patient or the care-giver, who then trusts a “device” to help them do their job with perhaps less effort involved. There are many more cases where this has to be more closely examined, not only the people involved, but the medical community, the proponents of ethics in medicine, the privacy groups and the public at large.

I went on to read that this same type of chip has now (like every other technology) been created in such a small form, that it can now be attached to every dollar circulating…

Now you’re whereabouts can be ascertained by the GPS system, and so can where you spend your money.

Mr or Mrs X are known to have taken a drive in the suburbs to visit a big box store and there spent X amount of dollars on whatever appliance, which is then registered by a warranty as belonging to them. What a marketer’s dream to have such precise information on the typical family.

The information part became even more frightful when we consider the Genome Project.

Again, like any other advance in medical research, the genome project (mapping the human genome) was touted as the possibility of finding the origins and hopefully the cures to a number of hereditary diseases. Cardiovascular, MS, and the list goes on, until we get to the scary word.. “cancer”. Of course this was considered to be the way of the future and with a world-wide collaboration of research specialists, was widely perceived as the most wonderful thing in the last century. Identifying the genes that caused these diseases would go along way into finding a cure for them. Identifying the genes (or rogue genes) that cause these diseases could help to eradicate them. Eradicate is a harsh word, as witnessed in the story about embryo screening. 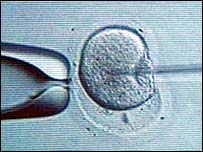 and subsequent generations – have a lower risk of breast cancer. Tests will allow the couples to select embryos free from the gene

The Genome Project, much as it will help to curb certain diseases and hopefully eradicate others still comes with a huge personal cost, and that is our inherent right to privacy. If an embryo can be screened for a disease, what then of every newborn child?

A professor of medical ethics wrote a very telling article about this supposedly great breakthrough and how it could possibly have a very negative impact on all of our lives. “If” this gene testing were to be made available to every child, and it was determined through the testing that this child had the hereditary markers to develop certain conditions and diseases, there could be two options. That the person would try to eliminate any other risk factors and live their lives in a way to minimize others and live freely and happily knowing they were doing the best they could. Other people, dependent on their personality, could perhaps not handle the psychological weight of knowing that their bodies could be a walking, ticking time bomb.

Worse still, consider the ramifications should this information find itself into the “wrong hands”, specifically in this case, the health and life insurance companies. They could literally refuse people coverage of all and any benefits based on this simple test, or (for profit of course) levy such hefty premiums on a large segment of the population, thereby increasing their revenues and their already increasing stranglehold on the population.

At the same visit with the veterinarian, I was also offered “pet health” insurance, in case of emergency, unforeseen illness and of course the proposed implantation of the GPS chip in my cat. – “A one time fee, then subsequent yearly dues for the 1-800 service”.

Given that my thinking on the subject of personal privacy has already been impacted by what I’ve read and heard, I found that my privacy policy now even extends to animals. Tracking the migratory patterns of endangered birds and animals may be a scientific necessity in order to ensure their survival. Tracking my cat through a GPS chip could indicate that he has been in a dangerous location, and perhaps then the “pet health” insurance company could also revoke his coverage. The implications for a small house cat are minimal, and of course as his owner I can accept or refuse such an offer.