Canadian Newsmaker of the Year: The Loonie!

The Canadian dollar made headlines throughout 2007, and its turn from lacklustre to lofty secured its fame Thursday as Time magazine’s Canadian Newsmaker of the Year.

Over the past 12 months, the loonie flirted with parity and smashed record highs against the U.S. greenback. 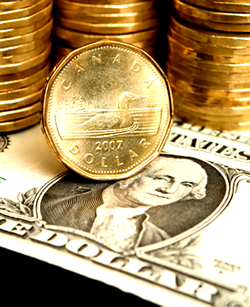 It began the year at 87 cents US and for the first third of the year seemed to be a currency that had peaked.

In April, the loonie’s value began to climb and was trading at 96 cents by July.

“Suddenly, what seemed unthinkable was entirely possible — that we could have a Canadian dollar worth the same as the U.S. dollar,” said CBC’s business host Danielle Bochove.

In late summer, though, the explosion of the subprime debt crisis south of the border created a bit of a setback as global investors scrambled, abandoning the loonie.

But as markets stabilized, the loonie resumed its climb and hit parity in September.

The Canadian dollar rose to $1.10 US in early November before falling in the middle of that month.

But as writer Laura Blue points out in the Time article, the loonie’s meteoric rise in 2007 did not  mark its pinnacle, which came more than 140 years earlier when it was worth $2.78 U.S.

She writes that the dollar was chosen 2007’s top Canadian newsmaker because of “the heights the loonie reached, for the economic upheaval (both good and bad) it brought, and for the rare bird’s-eye view that Canada got, looking down on its best friend and biggest rival in the world.”

Michael Elliott, international editor of Time, said there were other candidates for the title, such as former media baron Conrad Black, but the loonie interested him because it represented a wider issue.

“The currency of Canada is not solely a Canadian story. It’s a global story that has to do with changing balances in the international economy and significantly … a weakening of the American economy,” he told CBC News.

Time’s Canadian Newsmaker of the Year is an annual editorial special that began more than 10 years ago.

Time defines the newsmaker as the person, place, group or thing that has the most impact — for better or for worse — on the news in Canada.

Previous recipients of the title include Prime Minister Stephen Harper in 2006 and now-retired justice John Gomery, who headed the sponsorship inquiry.