Hackers Declare War on the Church of Scientology!


A loose confederation of online troublemakers who call themselves Anonymous have declared war on the Church of Scientology by flooding its servers with fake data requests, describing the attacks as punishment for the Church’s alleged abuse of copyright laws and alleged brainwashing of its members.

Anonymous congregates on the net at various hangouts such as 711chan.org (NSFW) and partyvan.info and sundry IRC channels. The group usually amuses itself by stealing passwords to 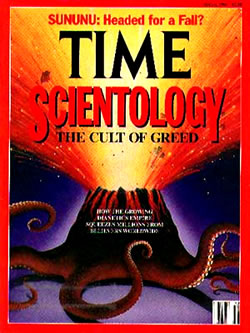 downloading sites and finding ways to harass online communities that its members disdain. They were last seen on THREAT LEVEL when a Los Angeles Fox News affiliate ran a story that hilariously implied the group’s arsenal included exploding vans.

The attack on Scientology, which Anonymous has dubbed Project Chanology, started in recent days, set off by the Church’s most recent attempt to censor the internet by forcing sites to remove a creepy Tom Cruise Scientology video. A wiki set up for the project directs Anonymous members to download and use denial of service software, make prank calls, host Scientology documents the Church considers proprietary, and fax endless loops of black pages to the Church’s fax machines to waste ink.

From the Wiki page for Project Chanology:

Anonymous has also sent out a press release and issued this video manifesto:

The Church of Scientology was founded by science fiction writer L. Ron Hubbard in 1952, and has a large presence in Los Angeles. Scientology’s core beliefs center on overcoming traumas from earlier lives, something overcome through sessions with a Scientologist “auditor” who uses an “e-meter” to measure electrical changes in the petitioner’s body.

The highly secretive Church of Scientology is liberal in its use of lawsuits to attack its critics and to have Church documents removed from the internet.

The Church of Scientology did not immediately respond to a call for comment.

Correction: This story initially reported that the Church of Scientology had issued a $5000 reward to identify members of Anonymous. That reward was issued months ago, seemingly in response to another online attack. Archive.org has a copy from July 2007.