By BEN SHINGLER
The Canadian Press

Instead of flooding YouTube with riot videos glorifying vandalism, dozens of indignant Habs fans are handing the evidence over to police.While arsonists torched police cars and vandals smashed store windows after Montreal’s NHL playoff victory on Monday, hundreds of young people milled about the riot zone shooting their own footage.

About 20 blurry videos were posted to YouTube by Tuesday afternoon while police said they’d received several dozen videos and were analyzing another 30 photos.

Senior officers say they’re surprised by the large number of citizen submissions. They’re even setting up an Internet site to receive more.

“It’s the first time that I’ve seen this done by the citizens of Montreal and I’m proud of it.”

Sixteen police cars and 10 buildings were damaged in the melee that went into early Tuesday morning. Sixteen people were arrested.

Samia Amro, 19, recorded a burning cop car on her cell phone but has no plans to send the video to YouTube or the police. She was just recording a slice of personal history.

‘I did it because I couldn’t believe it was happening,” Amro said in an interview.

Amro was with five friends Monday night and three of them recorded the chaos on their phones.

“People were taking pictures in front of the fire.”

Many Montrealers are angry the post-game violence tainted the celebration of an important victory and made their city look bad.

A typical caller on a local radio show said she would remove the Canadiens flag from her car because she doesn’t want to be associated with vandals.

Several others said the rioters were a small pocket of violent people who did not represent the majority of revellers.

Delorme said police saw a lot of people trying to discourage others from committing vandalism. 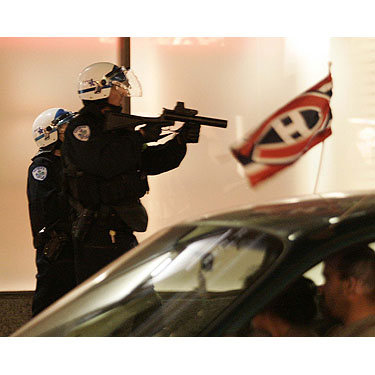 “We have to remember that 99.9 per cent of the people that were there last night were there to have fun,” Delorme said.

“And they want to continue to have fun.”

One tongue-in-cheek Facebook page is dedicated to planning for a riot June 6 — a highly speculative date for a Canadiens Stanley Cup victory.

Another Facebook page created after the Monday riot rails against all the mayhem.

“All Montrealers, hockey fans or not, should unite against the rioters and take them down,” wrote one member.

“The playoff season isn’t even halfway through and already the stupids have come out.”

One radio-show caller who was downtown after the game said people were celebrating like they had won the Stanley Cup, and most people were happy and peaceful. 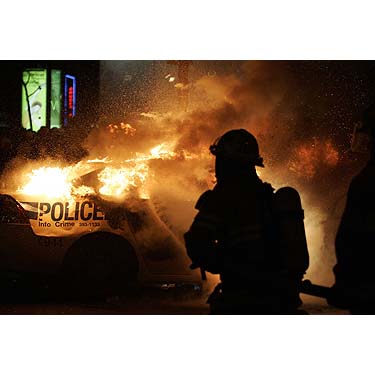 “It’s unbelievable how people can go into this game looking for trouble,” the man said, adding that some young people seem to have tremendous anger towards the police.

Montrealers seemed to share a sense of embarrassment that a first-round win could lead to such a mess.

“This event just shows that this city does not deserve to win the cup,” wrote a member of a Habs fan page.

“All we did was make it through the first round against a team that we were suppose to beat.”