Gerry Snyder – The Godfather of The Expos

Montreal city council briefly paused proceedings last night to pay their respects to the man that helped put this city on the international scene.

Gerry Maurice Snyder, a shoe salesman’s son, was born in Montreal on Feb. 14, 1920 and died yesterday at Lakeshore General Hospital.

“Mr. Snyder was an outstanding, true ambassador for the city who devoted more than 25 years of his life to public service” said Mayor Gérald Tremblay.

Snyder served as city-councillor for the district of Snowdon beginning in 1957 and during the 1960’s was considered Jean Drapeau’s right-hand man for issues dealing with English-speaking Montreal.

In 1960 Montreal lost its International League baseball team, the Montreal Royals (an affiliate of the former Brooklyn Dodgers). In 1962 Snyder spearheaded the campaign to bring major league baseball to the city.

After prominent Montreal businessman Jean-Louis Lévesque withdrew his support, Snyder convinced Charles Bronfman, a major shareholder in the world-wide Seagram distilling empire, to lend his considerable weight to the project and provide the funding guarantees required.

His efforts were finally rewarded when on May 27, 1968, at Chicago’s Excelsior Hotel, word finally came through that the National League was offering a franchise to a group of Montreal shareholders, led by Charles Bronfman.

The team would be called the Montreal Expos.

After Montreal failed to get the rights to the 1972 Summer Olympics, mayor Drapeau placed Snyder in charge of the organizing committee to set up and secure the 1976 Olympic Games.

Other candidate cities in the bid to host the 1976 summer Olympic Games were Moscow and Los Angeles.

The final choice was made on May 12, 1970 during the 69th IOC session in Amsterdam. Los Angeles was eliminated in the first round of voting.

In the second round, Montreal defeated Moscow, 41 votes to 28 (with one blank vote).

Although the games proved to be a financial nightmare, they did help solidify Montreal’s reputation as a worthy participant on the world stage.

In 1977 Gerry Snyder was one of the first recepients of the Queen’s Silver Jubilee medal, awarded to Canadians who have made a significant contribution to their fellow citizens, their community or to Canada.

In 1978, once again blending his passion for sport and politics, Snyder helped secure the Formula One Grand Prix for Montreal.

Snyder served as a commissioner with the Societe de transport de la communauté urbaine de Montreal until he retired in 1987.

When asked who he thought was to blame for the departure of the team that he worked so tirelessly to bring to the city, Snyder lay the blame at the place he knew the best- The Mayors Office.

“It’s disappointing to me that they haven’t had the full support of the city of Montreal, and I’m talking from the mayor down… As soon as they said they were going to sell the team, the mayor should have stepped in right away and said they would do everything they can to save the team.” 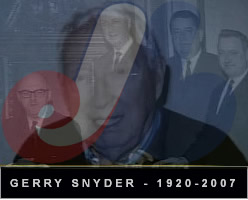 In 1987, reports were published and aired after a Surete du Quebec officer mistakenly named Snyder during a Quebec Police Commission Inquiry as being a prominant figure in the ‘Jewish Mafia’.

In 1988 Snyder successfully sued The Gazette and five other news gathering organizations, including CJAD, for malicious libel, and was awarded $310,000 in damages.

He is survived by their five children, Arlene, Beverlee, Glenn, Gary, and Gail.

Thanks for the memories Gerry…