Club Price: The Future is Now

The young man from Williams Lake, British Columbia doesn’t say much at all – he doesn’t have to… his game speaks volumes.

Last year alone, the calm, soft-spoken Price, not only lead the Canadian Men’s Junior team to World Glory but showed up late in the year in Hamilton and lead the Bulldogs to the Calder Cup Championship as well.

In both tournaments he was named MVP. 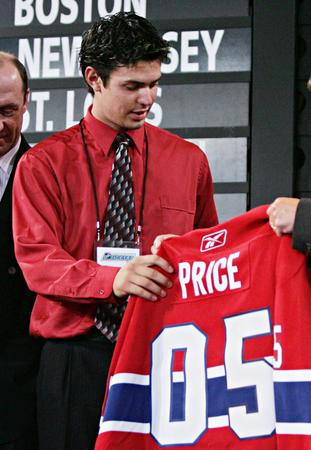 Selected 5th overall in the 2005 NHL Entry Draft, Price was quickly heralded as the successor to Patrick Roy.

He had the size, the talent and most importantly the demeanor of a quality (if not) star goaltender.

“Carey Price is the real deal! There’s no doubt about it.”

That’s how Michel Bergeron put it on the hugely popular, sports debate show 110% on TQS.

Playing his first game in the same building that Patrick Roy and Ken Dryden began their glorious careers, Price showed all the signs of greatness.

He stood up straight to all the shooters, played his angles well, brought a calming influence to the team and displayed his true competitive nature by stoning the ever-gifted Sidney Crosby on five separate occassions.

After the game, Price thanked his teammates for clearing out the rebounds, described the comparison to Patrick Roy as ‘flattering’ and the historical significance of legendary Montreal goaltenders starting their careers in Pittsburgh as a ‘nice coincidence’.