Why Were the 9/11 Tapes Destroyed?

Many Americans are content with the 9/11 Commission Report, but the two chairmen of the commission, Thomas Kean and Lee Hamilton are not.

Neither was commission member Max Cleland, a US Senator who resigned from the 9/11 Commission, telling the Boston Globe (November 13, 2003): “This investigation is now compromised.”

Even former FBI director Louis Freeh wrote in the Wall Street Journal (Nov. 17, 2005) that there are inaccuracies in the commission’s report and “questions that need answers.” 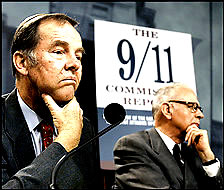 Both Kean and Hamilton have twice stated publicly, once in their 2006 book, Without Precedent: The Inside Story of the 9/11 Commission, and again in the January 2, 2008, New York Times, that there are inaccuracies in their report and unanswered–or mis-answered–questions.

On the second day of this new year, Kean and Hamilton accused the CIA of obstructing their investigation: “What we do know is that government officials decided not to inform a lawfully constituted body, created by Congress and the President, to investigate one of the greatest tragedies to confront this country. We call that obstruction.”

In their book, Kean and Hamilton wrote that they were unable to obtain “access to star witnesses in custody who were the only possible source for inside information about the 9/11 plot.” 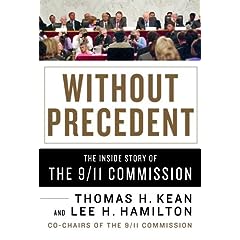 The only information the commission was permitted to have about what was learned from interrogations of alleged plot ringleaders, such as Khalid Sheikh Mohammed, came from “thirdhand” sources.

Consequently, write Kean and Hamilton, “We had no way of evaluating the credibility of detainee information” that was fed to them by third party hands. “How could we tell if someone such as Khalid Sheikh Mohammed was telling us the truth?”

The fact that video tapes of the interrogations existed was kept secret from the 9/11 Commission.

The video tapes have since been destroyed. The destruction of the videos has become an issue because of White House involvement in the decision to destroy the tapes and because the videos are believed to have been destroyed because they reveal methods of torture that the Bush administration denies using.

According to President Bush, the US does not practice torture even though he and his Department of Justice (sic) assert the right to torture.

Is the torture issue a red herring?

There is no reason for the Bush administration to fear the torture issue. The Justice Department’s memos have legalized the practice, and Congress has passed legislation, signed by President Bush, giving retroactive protection to US interrogators who tortured detainees. The Military Commissions Act passed in September 2006 and signed by Bush in October 2006 strips detainees of protections provided by the Geneva Conventions: “No alien unlawful enemy combatant subject to trial by military commission under this chapter may invoke the Geneva Conventions as a source of rights.” Other provisions of the act strip detainees of speedy trials and of protection against torture and self-incrimination. The law has a provision that retroactively protects torturers against prosecution for war crimes.

Did the Bush administration cleverly take advantage of the torture claims in order to spin the destruction of the CIA video tapes as a “torture story.” It is conceivable that the tapes were destroyed because they reveal the absence of confession to the plot. As Kean and Hamilton ask, without evidence how do we know the truth?

………………………………………………….
Paul Craig Roberts was Assistant Secretary of the Treasury in the Reagan administration. He was Associate Editor of the Wall Street Journal editorial page and Contributing Editor of National Review. He is coauthor of The Tyranny of Good Intentions.He can be reached at: PaulCraigRoberts@yahoo.com
………………………………………………….