Hillary Clinton’s Presidential Campaign Ties to the CFR and The Military Elite!

by Greg Bacon
Wake Up From Your Slumber

Hillary Clinton’s campaign committee as of October 2007 from a Washington Post article, reads like a who’s who of the CFR (Council on Foreign Relations) and the military elite. 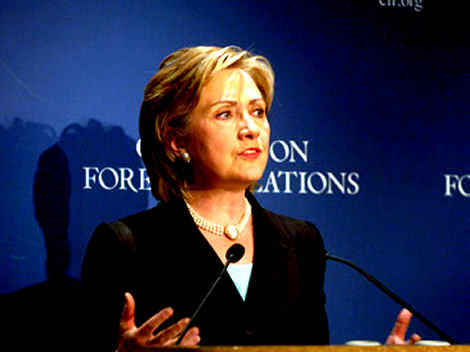 Most of these so-called “experts” have been floating in and out of Washington, DC for decades. When not actively involved in the federal government, they migrate to “think tanks” like the Brookings Institute and AEI.

Given that our country’s affairs have been sold down the road to special interests and that we are looking at series of military fiascos overseas, that could lead to WW III and a financial Tsunami hitting America at home, isn’t it time to jettison these alleged experts for some new blood?

After all, how in the hell could things get much worse?

Some of the distinguished members include:

(One could give the nickname “Bloody Maddy” to Albright, due to her comments on a 1995 CBS “60 Minutes” segment, where she stated that “The price is worth it” when asked about the Iraqi sanctions, which to date, had been responsible for the deaths of close to 600,000 Iraqi children. CFR member.)

(Sammy, in April 2005, pleaded guilty to stealing a total of five copies of classified documents from the Archives. Was Sammy’s theft of documents in connection with his work on the 9/11 Commission or was Sammy doing a bit of housecleaning in preparation for Hillary’s presidential run? We’ll never know, since three of the documents were destroyed.)

(Folks in the Balkans know Clark better as the Commander of Operation Allied Force, the 78 day bombing campaign against Yugoslavia. Ask them what their thoughts are… at least ask the ones that survived the 38,000 bombing missions.

(Council of Foreign Relations scholar. Co-wrote a paper that stated “… the biggest problem with the Bush preemption strategy may be that it does not go far enough.” And that “… U.N. member states have a responsibility to protect the lives, liberty, and basic human rights of their citizens, and that if they fail or are unable to carry it out, the international community has a responsibility to step in.)

Like the way the U.S. bribed nations to become part of the “Coalition of the Willing” to invade and destroy Iraq?)

(President Emeritus of the CFR. In a May 2006 article in TIME, wrote a an article gushing with praise for Condi’s talents???? ) 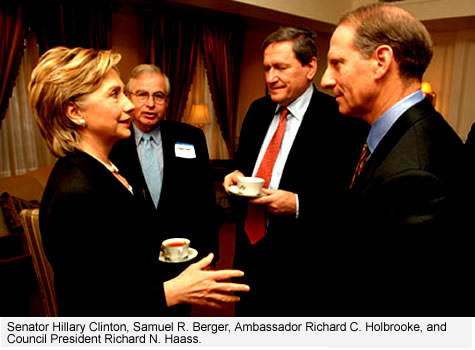 (Director, Saban Center for Middle East Policy. Indyk, has stated that the United States should maintain our long-standing, IRONCLAD commitment to Israel.

Really? Got any relatives fighting for Israel in Iraq, there Marty babe?)

(CFR Member. When he’s not out whooping it up for more wars in the Middle East, Keane serves on the board of one of the nation’s largest defense contractors, General Dynamics. And he’s also an adviser to the chairman and CEO of URS Corp, whose military contracts are a significant portion of its $4 billion in sales in 2005.

Edwin Starr asked in his excellent song, “War, what is it good for?” Mr. Keane seems to have found a very profitable answer to that question.)

(O’Hanlon hangs out at the pro-war Brookings Institute, home base of Martin Indyk. O’ Hanlon, like fellow war cheerleader Kenneth Pollack, tried to fashion themselves as originally against the Iraq war, before they were for it. Except, as this excellent article by Glenn Greenwald shows:

“What is the most vivid and compelling evidence of how broken our political system is? It is that the exact same people who urged us into the war in Iraq, were wrong in everything they said, and issued one false assurance after the next as the war failed, continue to be the same people held up as our Serious Iraq Experts. The exact “experts” to whom we listened in 2002 and 2003 are the same establishment experts now.

Hence, today we have yet another Op-Ed declaring that We Really Are Winning in Iraq This Time — this one in the NYT from “liberal” Brookings Institution “scholars” Ken Pollack and Mike O’Hanlon. They accuse war critics of being “unaware of the significant changes taking place,” proclaim that “we are finally getting somewhere in Iraq, at least in military terms,” and the piece is entitled “A War we Might Just Win.”

The Op-Ed is an exercise in rank deceit from the start. To lavish themselves with credibility — as though they are war skeptics whom you can trust — they identify themselves at the beginning “as two analysts who have harshly criticized the Bush administration’s miserable handling of Iraq.” In reality, they were not only among the biggest cheerleaders for the war, but repeatedly praised the Pentagon’s strategy in Iraq and continuously assured Americans things were going well. They are among the primary authors and principal deceivers responsible for this disaster.

(Sestak, was described by Military Corruption.com as being an arrogant and obnoxious “bully-boy” who delighted in being rude and unreasonable. Within 24 hours of the new Chief of Naval Ops, Admiral Mike Mullen taking control. Sestak was tossed overboard.

Rude and obnoxious? Sounds like a good fit for Hillary.)

(Another CFR member and President of the Brookings Institute)

After reading the above, don’t despair, since Hillary has been getting chummy with the evangelicals for the last 15 years.

She’s a member of a secretive Capitol Hill religious group that seeks to bring Jesus back to D.C.

Now Hillary wouldn’t seek to gain some political advantage from this, now would she?