auline Marois and husband Claude Blanchet should be visited by the ghosts of the aging farmers who were expropriated from their land, in order to construct the now, white elephant Mirabel Airport.

Marois, who seems a shoo-in in her Charlevoix riding, claims to live in a “modest home” in Anse-sur-Sac, overlooking the St. Lawrence River. It has been parodied as Anse-sur-Shack by a local opinionated television journalist and with good reason.(Infoman)

Their real home is in Ile Bizard…

On Ile Bizard (a northwest suburb of Montreal) Marois and Blanchet have clearly steered away from all green visions of our city and suburbs, albeit with a nod to geo-thermal heating, by constructing what is called “La Closerie”, 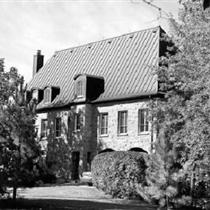 or in English, the little estate. Fortunate and suspicious changes of green (agricultural) zoning, permitted them to create a huge manse, adjoining gardens, ponds and a few ducks for good measure. A barn erected on an adjoining property (which is not farmed) was permitted due to it’s agricultural vocation.

Some of the land indeed belongs to the government, had been slated to build the continuation of Highway 440, which would run right through their front yard. Somehow, although it would definitely decrease traffic congestion on routes from the north shore into Montreal, it’s completion or even possible begin-date is largely stymied by the powers-who-be, if it comes to be built at all.

As a homeowner on a small residential street, I would really like to expand my front yard to include part of what is owned by the City of Montreal, but I hardly doubt that I’d start putting up fence posts when a city inspector would come and correct my “occupying” of public land.

Mirabel Airport should serve as a stern reminder of what the government can and cannot do. Hundreds of farm families were bought out (expropriated) for little if close to their land’s value. And they had no choice..my family’s home in the Laurentians was only accessable by driving right in front of these same farmers protesting, erecting huge billboards, all to no avail. Most farms had been in their families for years, and then these people who supply our tables and our markets were forced to find a new livelihood, often at an advanced age. No doubt they are thrilled with the prospect of the now defunct airport and surrounding area becoming an amusement park, complete with beach, spa, restaurants and bars.. in the words of the prospective developers, “a complete entertainment destination.”

With the Quebec emphasis on buying locally produced goods, services and even food, this “Closerie” of Marois and Blanchet is an equivalent to a slap in the face to Quebecers and especially those who still brave our climate and government whims in order to continue a farming tradition. Unfortunately, we can’t even get close enough to the place to see theirs.

My parting suggestion to the Marois-Blanchet “farm”: Rethink the debacle of MIrabel when you see that part of your land was zoned for agriculture( and technically still belongs to us). Please donate part of your unused land to a wonderful community organization called “Equiterre“.

Perhaps in doing so, there will be less comparison with the Chateau “Elysette”.