Death of a Hero – The Aaron Russo Story

After a long battle with cancer, Aaron Russo, the award-winning Hollywood producer responsible for such films as ‘Trading Places’ and ‘The Rose’ died  Friday morning at Cedars-Sinai Medical Center in Los Angeles. He was 64.

So what’s so important about the death of a former Hollywood producer you ask?

Well, Aaron Russo was more than just a Hollywood producer – as a teenager in New York he worked in the family garment industry where in 1963 he was credited with developing the first womens bikini. 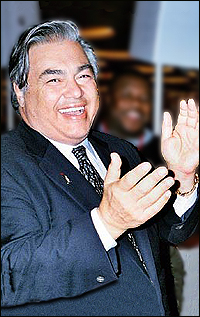 He later moved to Chicago and in his early twenties set up the trendy nightclub ‘the Kinetic Playground‘ that was responsible for introducing to the American public such legendary music acts as ‘Led Zepellin, The Who, Janis Joplin, The Grateful Dead and Jefferson Airplane.

It was during this time when Russo first encountered political corruption at a city level when he was forced to pay $2,000 a month ‘stay-in-business tax’ to the local Police Department.

After the 1968 Democartic Convention in Chicago which caused civil chaos in the city, Russo and his counter-culture environment were not welcome anymore. He was told to leave. He refused. After numerous court proceedings, the nightclub mysteriously burned to the ground.

Russo knew his time in Chicago was up so he headed back home to New York.

A short time later he caught the nightclub act of a then unknown Bette Midler and their eventual personal and business relationship led them both to stardom.

He later tackled the film industry and produced the modern Christmas classic “Trading Places” with Eddie Murphy and Dan Akroyd and the Academy Award nominated “The Rose” with Bette Midler.

Russo became involved in politics in the early 1990s when he produced and starred in a video entitled Mad As Hell in which he criticized NAFTA, The War on Drugs, the concept of a National Identity Card, and government regulation of alternative medicine.

In 1998 he ran in the Republican primary for governor of Nevada – was defeated but his vocal objections to the power elite ruffled many feathers among the Republican brass.
In 2002, before he could decide whether to run again, he was diagnosed with bladder cancer.

In January 2004, Russo declared his candidacy for the Libertarian Party’s presidential nomination but lost.

Later that year Russo started work on a documentary titled “America: Freedom to Fascism,” which was billed as an expose of the Internal Revenue Service mostly inspired by Russo’s own personal battle with the Agency. His exploration of the IRS in the film led Russo into some really scary territory –  The Federal Reserve and its ‘illegal’ control of the money in America.

With no mainstream media support for the film and very limited distribution, Russo eventually decided to upload the video to Google ‘just to get it out there.’

The video caught fire, and was downloaded more than 3 million times when Google mysteriously pulled the file. Since the video had already been spread all over the Web, Google had no choice but to reinstate it.

The video today continues to average over 10,000 downloads a day.

With over 10,000 downloads a day, Aaron Russo’s “America: Freedom to Fascism” has been viewed over 3 million times since its web release in May, 2007.

In the documentary Aaron Russo starts by asking a simple question “Is there a law that mandates that an American citizen pay personal income tax” and then sets on his way to find the answers.

The answers that Aaron Russo discovers in that quest takes him and us into some very dark and sinister places.

After a screening of the movie “America: Freedom to Fascism” in Chicago, Aaron Russo holds a group meeting at a local bookstore.

Great insight about the man and his mission…

Aaron Russo joins Alex Jones (www.prisonplanet.com) for a fascinating sit-down in depth video interview on a plethora of important subjects.

1 Responses to “Death of a Hero – The Aaron Russo Story”